Uses and curiosities of liquid ethylene 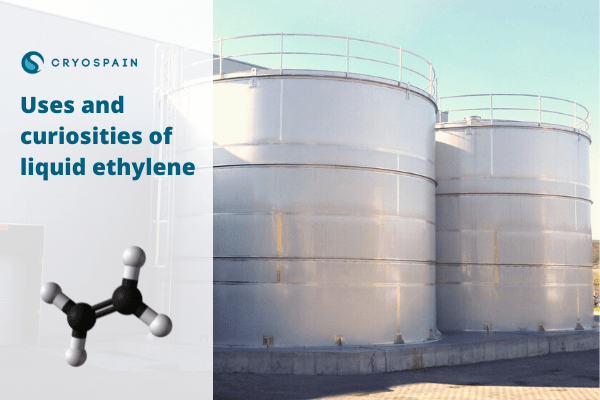 Liquid ethylene is the liquefied version of ethylene, a flammable gas that is increasingly used across a number of industries.

Keep reading to find out what exactly liquid ethylene is and how companies can store it in a safe and efficient manner.

Ethylene uses are varied and involve a number of industries:

Liquid ethylene on the industries

Liquid ethylene is obtained when ethylene is refrigerated and pressurized by applying low or cryogenic temperatures. This is done in order to facilitate the transportation and storage of this element, and mainly demanded by industries that need easy access to it.

A number of industries present a particular interest in storing and using liquid ethylene, including refineries, petrochemical plants, fertilizer plants and nuclear and power plants.

Ethylene glycol is a chemical compound derived from ethylene that presents distinct uses:

You may like: Discover the latest advances in cryogenic technology

In order to guarantee that liquid ethylene preserves all its properties, it must be stored at low or cryogenic temperatures. Thus, ethylene storage presents particular challenges and the need for special ethylene tanks which are typically custom-made for low temperatures.

All in all, companies must ensure the design for their ethylene storage is in the hands of experienced and up-to-date engineering teams that can guarantee an optimal and safe ethylene tanks’ design and implementation.

The process will involve a series of steps: from the design phase through advanced technology and software tools; the supply of the necessary materials; to the analysis of the best possible system for each project’s needs. At the same time, this engineering project will need to adapt to local, national and international regulations, while also applying recognized standards.

If you want to contact an expert team in the storage and transport of liquid ethylene and other substances, Cryospain is the answer. We have carried out numerous custom installations for gases such as ethylene, even in large flat-bottomed tanks. Take a look!

Engineering for industrial and medicinal gases

Smart designs for your needs

Experience and professionalism in each project

Thinking about our clients

Thank you! We'll get back to you as soon as possible.